Anjas Adi Prasetyo, the robotic team leader, explained that it was the first time for Untad to send three teams at once in national level.

“In the previous years, instead of four division, Untad used to release one team only to compete in national level. Yet, this year, Alhamdulillah (all praise to God), Untad can send three teams representing three divisions,” said Anjas. 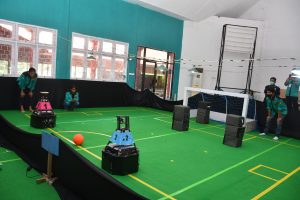 Those three teams of Untad has successfully defeated the other teams in regional level of IRC 2021 held virtually on September 23rd to 28th. For this reason, the robotic team leader of Untad is optimistic their parties will get the best result in national level.

According to Anjas, the three divisions used to be the winner in national level, like KRSRI achieving 1st runner up in 2018 and KRSTI triumphing 2nd runner up in 2019. Despite of virtual performance and the issues, Anjas hoped, this year, his team can achieve better results than before.

“Hopefully, in the upcoming contest, the performance will result better than previous ones,” said Anjas.

The national level of IRC 2021 will be conducted on October, 12th to 17th, and will be participated by 136 teams from all higher educations in Indonesia.