The book discussion was led by Dr. Rahmat Bakri, S.H., M.H., as the moderator, and the keynote speaker were Prof. Dr. Aswanto, S.H., M.Si., DFM., as the Deputy Chief Justice of the Constitutional Court of the Republic of Indonesia, and the other sources such as the academician representative of Untad, Dr. Muhammad Tavip, the member of Bawaslu of the Republic of Indonesia, Dr. Ratna Dewi Pettalolo, S.H., M.H., and the academician representative of Andalas University, Dr. Khairul Fahmi, S.H., M.H.

In her speech, Dr. Ratna Dewi Pettalolo said this event was managed due to high responses on the latest book launched by Bawaslu, and by discussing the book, she expected public can be enlightened before upcoming simultaneous election in 2024. 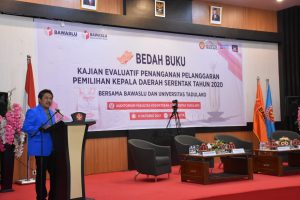 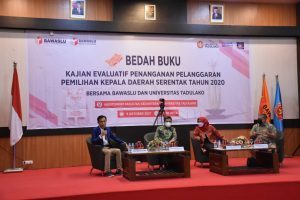 “This book was written to provide education and positive effects in increasing public participation, specifically as prevention function, how public should contribute and concern more when they suspect a violation in general election,” said Ratna Dewi Pettalolo.

According to Ratna, the book comprehensively contains election management guideline and some issues found in remedies for election offenses. The resolutions written in the current General Election Law was considered less effective, thus some adjustments are necessary.

“This book may enlighten the public dealing with the only problem they frequently speculate, bad quality of remedies for election violation, is not caused by the lack of professionalism and integrity of the administrator. In fact, the main trouble comes from the law itself,” said the the member of Bawaslu. For this reason, according to her parties, joint advocacy is required by all elements, not only Bawaslu, but also community, primarily, university which is well-known with its Three Pillars of Higher Education).

Officially opening the book discussion, Dr. Sulbadana, S.H.,M.H., emphasized how significant the event was to be organized despite unfinished Covid-19 pandemic. The arrival of the book, he said, enhanced literacy resources of the public, specifically related to election management in the future. “By understanding the subject urged in this book, hopefully we can have more appropriate election which harmonize the principles of democracy and popular sovereignty in accordance with national and state life as written in The Constitution,” said Dr. Sulbadana.

Dr. Aswanto, as the keynote speaker, elaborated that many studies has been conducted, yet the reviews contained in the book considered appealing in order to advance the role of Bawaslu in monitoring both general and local elections and keeping them democratic. According to Aswanto, the implementation of democracy frequently leave technical problems in the location.

“Presidential election in 2004 was the first time Indonesia holding direct election. After that time, the government was confused about who will officially be appointed to organize the next local election since The Law No.32 of 2004 says the authority is in the local government,” said Dr. Aswanto.

Dr. Aswanto also explained that in organizing general election, criticism is always there, even if it is managed according to procedures. “To become an election organizer, anyone who worked in Bawaslu should be ready to conquer the critics as whatever we do there must be pros and cons. Thereby, it is better for us to appreciate all representatives who willingly serve themselves for this nation by joining Bawaslu. They do not only come from law alumni but also another education background who work hard for training, said Dr. Aswanto closing his speech.

The book discussion was then continued to the presentation from the other sources, Dr. Muhammad Tavip and Dr. Khairul Fahmi, S.H.,M.H. Despite the use of hybrid (online and offline) meeting setting, the event still received warm welcome from the participants including Bawaslu officials, academicians, university students, and the general public. Soon, the roadshow of book discussion will visit Andalas University in Padang, Hasanuddin University in Makassar, and will end up in Cendrawasih University, Papua.